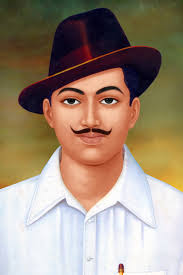 Bhagat Singh or better called as Shaheed Bhagat Singh was born on 28th September, 1907. He was hanged by East India Company on 23rd March, 1931 along with Sukhdev and Rajguru. At that time, he was termed as terrorist by East India Company but every toddler of this country knows that he gave his life fighting for the freedom of India. Just because his method of revolution was different from that of Mahatma Gandhi doesn’t means that he was wrong in any way. But what makes us sad is to know that he is still termed as Revolutionary Terrorist rather than a Martyr. It has been 70 years since the freedom of our country and still no justice has been made with the title of Bhagat Singh.

Even though during the Government of Manmohan Singh, it was finalised that he would be termed as Martyr,but it is still not rectified at places. You may not know but he is still not termed as martyr in Government Documents. Did he do anything less than other freedom fighters ? No. His descendants are doing a movement in order to get Bhagat SIngh the title of martyr.

Descendants expected that they will get justice for Bhagat Singh once there is NDA government, as the NDA helped them during the movement in 2013 but even after NDA came into power in 2014, there has been no changes in the text books.

I hope that the government does justice which has been neglected for the past seven decades as soon as possible. News 18 has summarised Bhagat Singh’s life in one picture.

Once again a very happy birthday to Shaheed Bhagat Singh Ji. A very very heartly thanks to him for making our India a free country and inspiring so many youth to take part in that freedom movement.

Okay so this is the end of this article. I hope that you liked the post and if my hope is true then do share this story with your friends, family, relatives and with all the people you know in this Lovely World. Keep visiting Laughter Mania for some really amazing content. Have a great time !

If you want to earn some money then you can visit this link for really amazing cash prizes : Google Earn

For watching funny videos you can visit Laughter Mania Videos.

Can we take a tour of your mailbox?

Can we become friends?